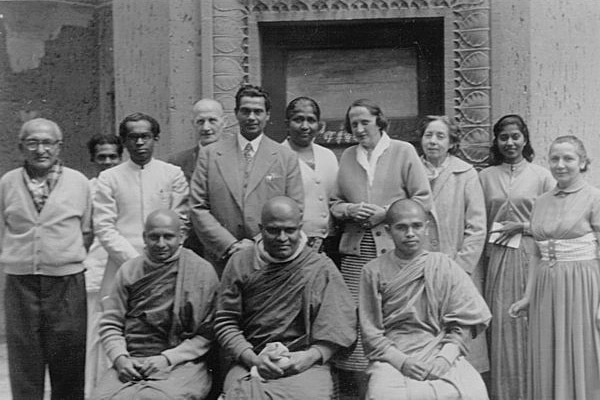 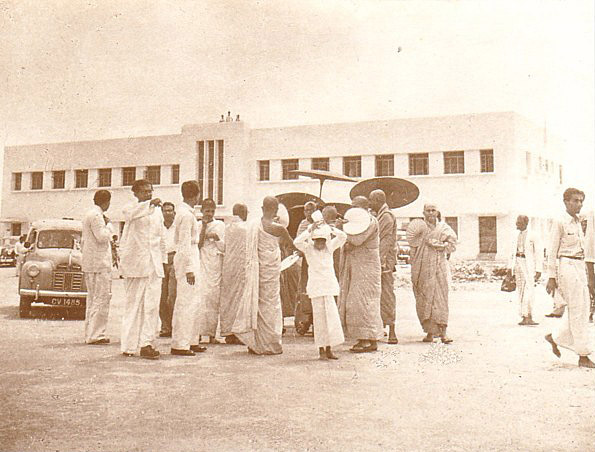 The first Buddhist Mission to Germany

Senaka Weeraratna (nephew of the founder of GDS) with the reservoir with relics on its head, that they brought to the Buddhist Vihara to Berlin as ambassadors of the Lanka Dharmaduta Society 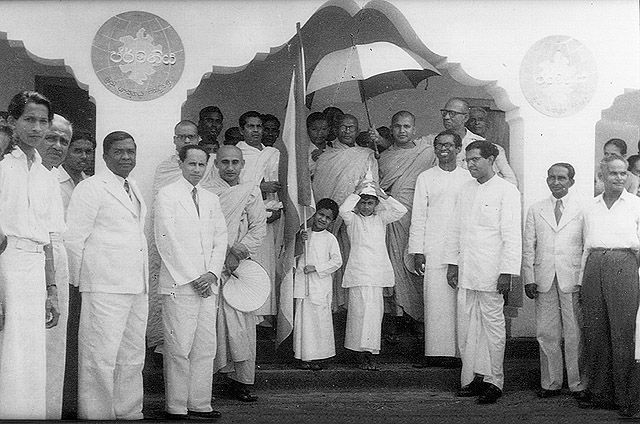 In the middle flag carrier Tissa Weeraratna currently vice president of GDS and manager of Das Buddhistische Haus since year 2000. Rright next to him his brother Senaka Weeraratna with the Stupa on its head, next to him Ashoka Weeraratna. 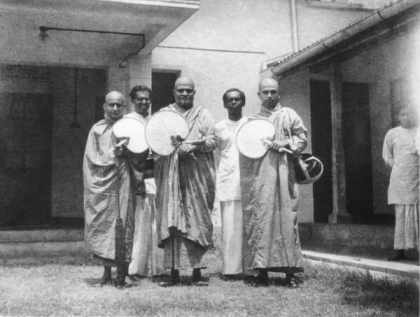 The First Theravada Buddhist Mission
that left for Germany on June 15, 1957 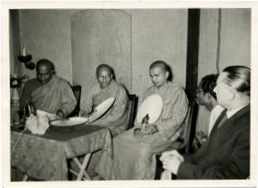 Fifty years ago on June 15, 1957 an unique and unshakable bond was forged between Sri Lankan and German Buddhists. On that day three scholar monks drawn from Vajiraramaya, Colombo set off on a Dharmaduta mission to Germany. Leading the delegation was the Venerable Soma Thera. The other two bhikkus were Venerable Kheminda and Venerable Vinitha. They formed the first permanent Theravada Buddhist mission to Germany from Sri Lanka. It was an epochal event in the history of Buddhism.

It all began six years after the end of World War II when a young Sri Lankan businessman dealing in jewellery and Swiss watches paid his first visit to Germany. The year was 1951 and the country was slowly recovering from the devastating effects of the war. The young man Asoka Weeraratna came across many people who had lost their families – lost their wealth – lost almost everything. It left in him a deep impression.

At the time the widespread sentiment all over Germany was "kaput, kaput, alles kaput (finished, finished, everything is finished)."

They had nothing to fall back on.

For the Germans the World War was a watershed. Nazi racism and brutality had pushed Germany into not only an ideological crisis but also a crisis of civilization - a severe moral predicament. The Holocaust had shamed the Germans. Consequently, an increasing number of them found no real solace in Western religious-political traditions since it was the very same environment that had paved the way for Hitler’s rise to power and brought ruin to almost the entire European continent.

Upon returning from Germany, Asoka Weeraratna established on September 21, 1952 the Lanka Dhammaduta Society which was later renamed German Dharmaduta Society (GDS) in 1957. He was appointed its Honorary Secretary while the renowned German Monk, Venerable Nyanatiloka Maha Thera became the Patron. Ven. Nyanatiloka stands foremost in the history of Buddhism in Germany having become the first German to join the order of the Sangha and founded the Island Hermitage, Polgasduwa in Dodanduwa, Sri Lanka.

In 1953, Weeraratna embarked on a hectic and extensive tour of Germany to survey current Buddhist activities and the scope for sending a Buddhist Mission from Sri Lanka. He visited Hamburg, Stuttgart, Cologne, Bremen, Munich and Berlin, among other cities and towns. He met Germans from all walks of life and they turned to him because he had an unique message to offer: the message of the Buddha. He found that Germans were increasingly prepared to experiment with ideas where the terms of reference lay outside the Western system of thought. And Weeraratna was able to satisfy their spiritual hunger with the message of the Buddha. The Germans had found in Buddhism something unique – a highly developed ethical system with an heavy emphasis on peace and non-violence albeit without any dependence on an almighty God.

Until the outbreak of World War II, Buddhism prevailed in Germany among a small circle of thinkers and lay adherents. Among notable Germans living the Buddhist way of life was Dr. Paul Dahlke, a pioneer ing German Theravada Buddhist. The German Philosopher Arthur Schopenhauer sparked an interest in Buddhism by being the first to present the Buddha’s teachings to the West in lucid language.

However under the Nazi regime, Buddhist activities suffered and one of its victims was Dahlke’s Secretary Dr. Kurt Fischer. He died after receiving summons from the notorious Gestapo. A large number of German translations of the Pali Tripitaka and other books on Buddhism were lost in the war. Some of them were impounded by the Hitler Government.

Asoka Weeraratna clearly noted during his second visit to the country in 1953 that the most urgent need for German Buddhists was the establishment of a Buddhist Missionary Centre, a Vihara and settlement for lay Buddhists and upasakas.

In the words of the eminent American Buddhist scholar monk Bhikkhu Bodhi, Weeraratna "was a man of vision who had the drive and stamina to translate his vision into fact… Asoka Weeraratna’s life was crowned by three great achievements: the establishment of the German Dharmaduta Society in Sri Lanka; the establishment of the Berlin Buddhist Vihara in Germany and the creation of the Nissarana Vanaya Hermitage at Mitirigala" (The Necessity For Promoting Buddhism in Europe - GDS 2000)

Sri Lanka, which for nearly five centuries had been receiving waves of Christian missionaries from Europe, was now in a position to send Buddhist missionaries to the West on the basis of a new found confidence and conviction among Sri Lankans that they had something deep and far reaching to offer to Europeans reeling under the terrifying consequences of a brutal war. The opportunity had come for a historic turn around.

On June 15, 1957, the first Theravada Buddhist group from Sri Lanka left for Germany. It comprised three Dharmadutha monks, namely Venerable Soma, Venerable Kheminda and Venerable Vinitha all drawn from the Vajiraramaya, Bambalapitiya. They were accompanied by W.J. Oliver Soysa, a close associate of the Vajiraramaya monks. Dharmapriya Mahinda (formerly known as Nelson Soysa) a Vice-President of the GDS had left for Germany earlier.

The mission commenced its journey from Mihintale on Poson Poya Day June 11, 1957 with the blessings of the Maha Sangha and the Buddhist public.

The second stage of the journey to Germany began on June 15, from the GDS Headquarters, No 417, Bullers Road (now Bauddhaloka Mawatha), Colombo 7. A motorcade of about 100 vehicles participated in the procession that escorted the three bhikkus from the GDS to the Elizabeth Quay, Colombo Harbour.

There, the GDS and the Harbour Buddhist Society organized a meeting under the Chairmanship of the Venerable Kalukondayawe Pannasekera Nayaka Thera to farewell the mission. Prime Minister S.W.R.D. Bandaranaike handed over a casket of sacred relics to the Ven. Soma Thera. Former Premier Dudley Senanayake presented the Buddhist flag to the mission to be used at the Berlin Vihara. The monks embarked on the voyage on board the `SS Orantes’ amidst cries of "Saadhu, Saadhu" from the people who had come to witness the memorable ceremony.

The ship reached Naples on June 29, 1957. The mission upon disembarking at Naples proceeded to Frankfurt by train via Switzerland and was met by Asoka Weeraratna, who had flown in from Colombo. The mission then flew from Frankfurt to Berlin where members of the Berlin Buddhist Society greeted them at the airport. On July 2, 1957, the mission took up residence at the Das Buddhistische Haus in Frohnau, Berlin.

A few months after the mission’s arrival in Germany, it became known that Das Buddhistische Haus (the Buddhist House) that Dr. Paul Dahlke had built in 1924 was up for sale. Asoka Weeraratna stayed six months in Germany at his own expense to negotiate the purchase of the property from Dr. Dahlke’s relatives. There was strong non-Buddhist opposition to the move to buy the building.

The GDS however purchased the house in 1957, renovated it, furnished it with additional rooms and a good library, and stationed Sri Lankan Bhikkus there to take charge of regular lectures and meditation courses. Asoka Weeraratna thus fulfilled a long-cherished wish of German Buddhists to have properly trained bhikkus in their midst.

This work earned for the GDS the immense gratitude of the German Buddhists. States Dr. Wolfgang Schumann, leading German Scholar, former counselor of the German Embassy, Colombo and author of many books on Buddhism:

"The Buddhist House founded by Dr. Paul Dahlke in Berlin-Frohnau in 1924 survived World War II in dilapidated condition and probably would have been auctioned and dismantled if the Ceylonese German Dharmandutha Society (founded 1952) - which inherited a large sum of money from a German Buddhist - had not come to its rescue…" (The Maha Bodhi Journal February March 1971)

The German benefactor was Walther Schmidt who left a sum of half a million marks in his last will to the GDS after he became a practising Buddhist following his meeting with Asoka Weeraratna.

The establishment of a permanent Buddhist Mission in his home country was the realization of Ven. Nyanatiloka’s cherished dream, although unfortunately he did not live to see it. Four years earlier, on May 25, 1953, in a message to the GDS and published:

"I believe that chances for Buddhist mission work in Germany are now greater than ever before. I am therefore very happy that the Lanka Dharmaduta Society has undertaken that great task of sending a well-prepared mission to Germany…"

Since 1957 a stream of Buddhist monks from Sri Lanka and other countries have resided at the Berlin Vihara to propagate the Dhamma in the West. It attracts considerable amount of visitors daily ranging from researchers to school children. It has one of the best Buddhist Libraries in Europe. Meditation retreats, Dhamma classes, Saturday discussion circles and Sunday lectures are a regular feature of the programme of the Temple.

In 1972 Asoka Weeraratna joined the order of the Sangha as the Venerable Mitirigala Dhammanisanthi Thera and passed away at the age of 80 on July 2, 1999.

On May 6, Vesak was celebrated at the Berlin Vihara with the participation of members of the Maha Sangha, distinguished guests, Sri Lankan, German and Thai Buddhists and people of other nationalities.

The participating bhikkus were drawn from Sri Lanka, Thailand and Europe. They were the Ven. Dickwelle Seelasumana, Ven. Tammannawe Dhammananda, Ven. Aswatte Mangala, Ven. Achan Anusak and the Ven. Medhayo.

The Berlin Vihara was built primarily to serve the spiritual needs of German and other Western Buddhists. It is therefore the duty of all true Buddhists, both German and Sri Lankan, to ensure that this hallowed institution continues to meet these objectives and retains its exclusive Buddhist character.

To quote Dr. Raimar Koloska, Member of the Executive Committee of the Deutsche Buddhistische Union (DBU):

"Das Buddhistische Haus Berlin should in the future also be a place full of monks, nuns, upasakas, upasikas, friends, newcomers and interested people. It should facilitate the pursuit of its emanating spiritual work for all humanity for those who understand the profound message of the Buddha and are willing to integrate the Dhamma into their life." (50th German Dharmaduta Society Anniversary Souvenir)